The Heat is Gone: US Growing Degree Days Plummet

Most coverage of the difficulties plaguing the 2019 US season has revolved around the consequences of our “wettest year ever.” Rightly so, as the flooding across the nation continues to effect a substantial (and often fatal) blow to farmers’ operations. The flooding has been widely covered in most media, to the exclusion of another important factor: temperatures are much colder this year than the previous.

While the media is less vocal about this aspect, it is no secret. The University of Minnesota shared a graphic demonstrating that this has been the coldest and wettest season since 1920.

The extent of delayed planting of the 2019 U.S. corn crop appears to be coalescing around the idea that, in general, the U.S. corn crop is around three weeks late. With that in mind, the temperature trend takes on extra urgency for the crop.

And, at this point, temperatures are not cooperating on the side of growing degree day accumulation. Most of this June 10-14 week has average temperatures across the central U.S. forecast at from 4 to 12 degrees Fahrenheit below normal. And this cool pattern stays in effect for the entire remainder of the month of June.

There is still time, but growing degree day count will be a big detail the rest of this season. After all, a lot of the prime time has, literally, floated away.

Let’s take a closer look at this “growing degree day count,” as it may offer insight.

Growing Degree Days are a measure of heat accumulation used to predict crop maturity. In the absence of extreme conditions such as unseasonal drought or disease, plants grow in a cumulative stepwise manner which is strongly influenced by the ambient temperature. In other words, GDD values provide a best case outlook as to plants’ pace to maturity.

If your GDD drops below certain thresholds, certain crops can no longer be grown.

GDD is calculated as the sum of daily temperature averages in excess of a given threshold, often 10C/50F (maize), but this can be different for certain crops.

Tim Agnew of Big Nugget Farm wrote me, noting that GDD in his neck of the woods has plummeted 43% from 2018. Several sites make this data available, including Syngenta’s GreenCast.

Checking a few more locations, I found that each had experienced a significant drop in GDD. Stunned, I went about collecting the data for every US ZIP code.

This data actually helps to quantify our shifting growing zones:

As the Solar Minimum forces temperatures to decline further, more and more of the planet will lose the ability to farm as we have been. And, again, this statement is based only on cooler temperatures, and does not factor in increased cloud cover, precipitative extremes, hail storms, or still other effects of Galactic Cosmic Rays. Clearly 2019 has been colder than 2018. To put these 2019 values in perspective, we can look to longer term averages of GDD: This makes our “cold” year feel somewhat less extreme — we can relax a bit, things aren’t that bad! But why such an extreme drop off from 2018 to 2019?

The last such significantly colder season year-over-year was 2008 to 2009: So what do 2009 and 2019 have in common? Both years are marked by low solar activity, during a deep Solar Minimum: This means that as we enter an extended minimum — a Grand Solar Minimum — we must expect shorter and cooler growing seasons to continue. These, particularly combined with increased cloud cover (see Svensmark’s Cloud Mystery), and temperature/precipitative extremes caused by meridional flows of a weak jetstream, merit our full attention. 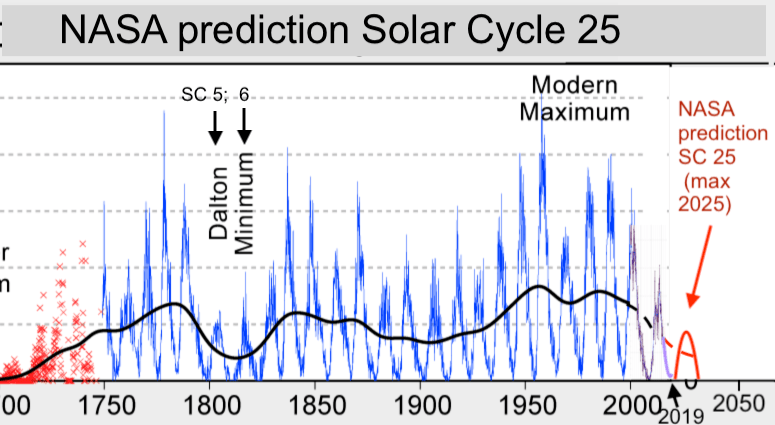 Modern agriculture is highly bespoke, with little tolerance for conditions to deviate without catastrophic cascading failures. The systems upon which civilized society is wholly dependent to eat are now failing.

In this crisis, however, lies the opportunity to replace toxic petrochemical agriculture en masse with permaculture and other regenerative practices, and return to indigenous knowledge and values. We all know massive change must happen — and now we witness a catalyst. Be the change.

with secret courts issuing DNS takedowns, even privately hosted sites (like this one) can be made unavailable by name.

a period during which solar activity diminishes, resulting in drastic climatic and geophysical changes to our planet. These include increased galactic cosmic rays (GCRs), seismic activity, and volcanism; the latter often results in a global reduction in temperatures (see "the year without a summer" -- and much more on the IAF wiki).